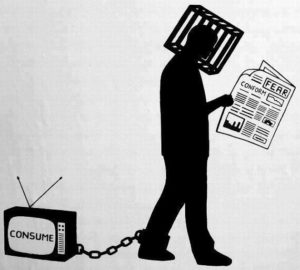 The Final in The Three-Part Series.

An internet search about how to stop being a slave will result in thousands of hits from email, technology, social media, food, wages to mention a few.

The definition of a slave is a person entirely under the domination of some influence or person which applies to the physical, psychological and spiritual spheres of life.

But, it’s the mindset that this post focuses upon.

Consider the requirement for a driver’s license in my country:

Remember, it’s a public road that your taxes paid for.

The officials, either directly or indirectly, work for the government who is funded by your taxes.
They are public servants (note the word servant) but they act like your master.

So where is your freedom?

Surely you should be able to drive on a public road without all of these permits/licenses?

Yes, but that is done for your safety.

Really?
What about those who don’t know how to drive or have no licenses?
And those people who bought their permits and licenses?

Yet even with all the controls, people are still involved in accidents and fatalities.

Do you accept all the red tape because you’re comfortable with the status quo? You don’t want to rock the boat?

You’ll pay your dues, and accept whatever the authorities tell you as long as you can continue to believe you’re free.

Your first 15 years of social engineering have borne fruit.

The Benefits of a Slave Mentality.

What is the Antidote?

One of the worst feelings in the game of life is finding out that you have been conned.
That crunch deep inside as you hear that the Dream you are chasing is a fantasy.

That’s the feeling when you realise that the game has been rigged, the players are cheating and that there’s zero chance of winning.
A casino will give you better odds.

Your anger towards the cheaters is nothing compared to the anger you have for yourself because you were duped.

Worst of all, you knew there was something wrong.
You knew something was off, but you chose to ignore your instincts.

You have two choices.
You can spin the wheel again and hope that you’ll win, or stop playing.

The Easy Way Out.

If this post made you defensive, confused or angry, then it’s a step towards self-ownership.
If there wasn’t a grain of truth in the post, then you would have no emotional reaction.

The easy way out is to forget what you’ve read and be promoted to the class of true slave.

Be warned, getting out is easy, staying out is hard.

98% of the people you associate with from family, friends and colleagues are still playing the game, and believe they will win.

You’ll question everything you know as the foundations that you’ve built your life upon are all suspect.

You’ll be labelled as one and the deeper you go, the more you’ll be judged and ostracized.

Going against the flow or leaving the herd is never easy.
The more you research, the worse it gets as the threads are interwoven into every piece of your life’s fabric, to the extent that you’ll think your life is a fabrication.

But take heart. The 1% that is awake have survived and so can you.

Oh, by the way, if you decide to go back to the safety of the herd, you’ll never be the same. You’ll sleep with one eye open because the herd will smell the renegade on you.

Do you still want the antidote?

Think about this.
If someone told you any of this six months ago, what would your thoughts have been? How would you have reacted?

You would’ve shot them down in flames, called them all sorts of names and labeled them as … ?

Don’t share this with your anyone unless they are like-minded.
If you have to, put out some feelers and ask them their opinion about something that you’ve learned.
Listen to their answers, and give a vague reply if they ask why.

#2 Gather as Much Knowledge as You Can Handle.

You’ll be overwhelmed by your research.
It’s difficult to understand and absorb.

The developers included this for those who quit playing according to their rules.
Their prime tactic is to divide and conquer.

Let two opposite views be expressed, and watch the arguments fly thick and fast.
Read the comments on your favourite social media source.
Talk about a civil war of words.

What about Main Stream Media?

The roots of journalism have been chopped off, and fake fruits abound.

The scourge of fake news, disinformation and manipulation has created fact resistant humans.

Your main argument is; that this is so big what could I ever do?

#3 Look at Your Circumstances and What You Can Change.

Things that you control such as:

You instinctively know all the above things but you’ve not followed through.

Why?
Because the system is designed to keep you dependent on its products, services and solutions.

Such a short list?
Don’t let the your system belief in complicated steps fool you.
The steps seem very simple which in itself weeds out the majority of quitters.
Try and be quiet for an hour, then try a morning of silence.
Keeping your mouth shut is easy compared to keeping the voice in your head quiet.

Take it slowly as you’re undoing decades of training.

Step away for a while if you are overwhelmed.

Once the camouflage has been removed, it’s easier to see the threads and how they’re woven into your fabric of life.

Slavery was abolished but the insidious ingredient of a slave mentality remained and thrives today.
It affects everyone and isn’t limited to gender, race, culture or creed.

These posts are an overview, a piece of the puzzle, a starting point allowing you to see through some of the camouflage.

They don’t cover all the topics in detail, however, you’re encouraged to dig deeper, research and build your own understanding.

The links give you more information to allow you to choose your next steps.

It has and always will be your choice.

If you do not know you are a slave, you cannot be freed.

The best slave is the one who thinks he is free.
Goethe