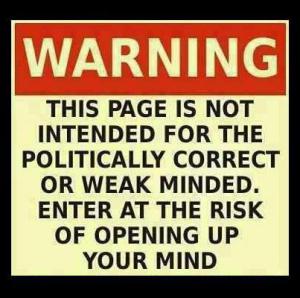 It would be very useful to know when you are confronted with a weak-minded person.

I find the longer I live the more feeble-minded people I come across or is it just me?

Could it be the addiction to technology that has made younger generations lazy?

Is it perhaps that they have been brainwashed to the extent where nothing is questioned?

Have our educational institutions created drones who no longer think or read?

I am not really sure but I think it is a combination of all the above that has created a mindless mass of humanity, trained to be docile and accept all that is fed them.

The definition of weak-minded is:
not firm of mind; indecisive; unable to refuse or deny; feeble-minded; showing weakness of resolve or thought

Unfortunately, there is no technology available yet that can reveal whether a person is weak-minded but there are some signs that you can look out for.

Once you recognize these traits in a person, or yourself for that matter, do you engage with them or remain silent?
Many are so set in their ways that you will lose your peace and balance trying to convince them there is another way.

If you find these qualities in yourself then perhaps it’s time to open your horizons and leave fear behind?
Is it not better to be compassionate and alive than self-centred and bitter?

The worst part of being weak-minded is that you are the perfect slave material.
As long as I feed you material that justifies your thoughts, I can manipulate your actions to suit my agenda.

You allow me to pull your strings.

To argue with a man who has renounced the use and authority of reason, and whose philosophy consists in holding humanity in contempt, is like administering medicine to the dead, or endeavoring to convert an atheist by scripture.
Thomas Paine